Do Not Sell My Personal Information

My beautiful late Pappou/ Grandfather, was a Greek islander of Anatolian descent. His professions included; Saddler, Farmer, Market Gardener, Soldier and Army Cook, Soap Maker and Distributor during the great depression and a Butcher’s Apprentice. Pappou was a champion Backgammon player and above all a Kind Gentleman as remember by many and those who loved and knew him.

After my Grandparents married they helped raise and support my grandmothers’ three younger siblings and her young widowed mother who outlived my Grandfather. Later in life, my Great Grandmother informed me that my Grandfather was an angel.

My late Grandparents’ love for each other, was so strong that before the news broke out about the blast, my late Grandmother was on her knees, newly wedded and praying that her husband would be safe.

Amongst his pets Pappou had Tzak, the dog, many cats, horses, donkeys and goats.

Towards the end of the war, Pappou, learnt to converse in Italian with a small group of Italian soldiers, swapping goods for goods, so that he could carry out his soap making.

Immigrating to Australia my Grandparents became Australian.  Proud to be Hellenes/ Greek, excited and anxious to commence their new life in Australia. They had a cat which was very playful, a lot of fun and always performing tricks. Pappou worked extremely hard on the South Australian railways and later in a factory, was self sufficient, cooked and carried out many chores, kept a huge garden of vegetables, herbs and fruit trees; including one of my favourites, wild Cherry trees!

When Pappou planted a wild cherry tree in our backyard and it started growing…  I would go to the tiny non fully grown cherries, pick them…. Hold the miniature cherries in my hand and squeeze them, as I watched the liquid cherry reddish/ purplish colour, rush and run all over my hand and so my excitement, my inspiration for liquid colour – Paint began at an early age!  I noticed how the liquid stained my hand and started rolling it around on my skin – ‘Wow’ !

“Marisa, leave the cherries to grow so we can eat them…”  But little did dad know, what I had discovered!

When I was a toddler Pappou would sit me on his knee and I would play with his orange beaded komboloi/ Komboloyee, Greek ‘happy’ pass time beads.  Many years later, I found one of the orange komboloi beads tossed in my late Grandparents garage and knew that Pappou was ‘talking’ to me.  One bright orange bead –

Whenever my father tried to renovate; repair windows with putty, little fingers followed – I was a crafter from way back!

Sorry dad!  You had to re apply everything twice – maybe even three times!

I was fascinated with creativity!

Dad and Pappou, You Laid The Foundations For My Artistic Journey Ahead… We Just Didn’t Know It At That Time. I Suppose Destiny And Love Work Like That

Pappou was the first of all grandparents to see me and hold me when I was born.

Three nights before a major life changing event, I dreamt of late Pappou!

In life, I remember his lovely presence and his love for me.

I believe that my Pappou Angelis always watches over me.  I have always felt his love and spiritual presence.

There are always signs;

Pappou is the Magpie that sings to me and the Monarch butterfly that flutters before me!

Above: The Eternal Flame – Candili is Always Lit in My Heart for Pappou 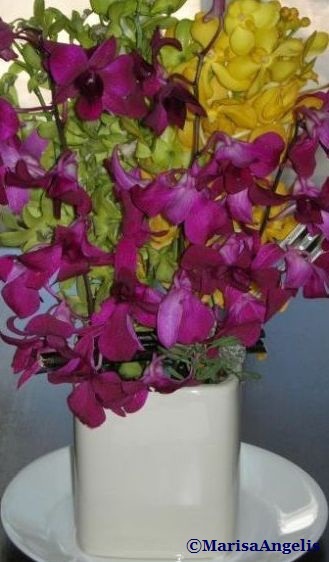 As a teenager, destiny took me to Singapore!

During my stay, I visited the Botanic gardens and saw my first Orchid, or perhaps I had seen Orchids before, but had not really noticed them until I saw a fuschia coloured Orchid.

This uniquely beautifully flower had five petals, with one petal being larger than the others.

Walking through the humidity and dripping with perspiration, (in those days I used hairspray – yikes!) Says the me, now! I remember how the sticky stuff melted and liquified through my head and hair and onto the white t-shirt that I wore as I walked briskly through the magical and naturally beautiful gardens.

The Orchid Enclosure at Singapore –

As time passed I learnt about many other species of flowers and plants, but I always had a special liking and love for Orchids.

Occasionally throughout life, I would reflect on that happy moment of holding that beautiful delicate flower and remember it like yesterday, as I photographed it with my then pocket sized manual film camera.

The colour was amazing and much better than the photographically captured photo.

Around me, no one that I knew had Orchids and I hardly ever saw any in floristries…

Years went by and destiny took me to Canada where after a very long time, almost a life time, I reunited with my now late Godfather.

We travelled to farms and met farmers who grew and sold organic fruit, vegetables, herbs and flowers.

My late Godfather, like myself was a fastidious cook who took care, even for when it came down to fresh produce for his restaurant.
We exchanged recipes and as I looked through my late Godfathers’ generous collection of cookbooks, I came across a recipe book by Sophia Loren!

From this book and combined with a Greek recipe, he would make an all seasons vegetable stew that never changed in flavour.

The Canadian summer climate most probably the air pressure seemed heavy and lacked in moisture/ humidity.
All of my late Godfather’s guests use to feel the same regardless of what part of the world they came from; Greece, Australia, America, China etc

One day we were looking around and inside his newly built house and all that he had indoors were two bay leaf plants/ trees that had grown and were ready for planting. Unfortunately they were not very healthy.
We tried everything to get them healthy again but the climate was not good for them.

My late Godfather felt that something was missing; something natural, nature, so one day, he decided that he would look for and search to find floral plants of some sought, but didn’t know what to look for.
He just wasn’t sure… Then suddenly I remembered the joy that I had when I experienced the Orchids back in Singapore!

I described them to my late Godfather and went on to explain how they come in many various colours, how they are delicate and almost ‘human like’ and so beautiful.
He liked the description and idea, so he contacted a florist that he knew and to my inkling, the flowers would probably not survive as being a very sensitive species, in the Canadian climate and particularly in the environment in which my late Godfather wanted to place them.

After this, he decided to stick with his apple trees, vine and tomatoes that his friend and employee was looking after.

After my stay and some years later in Australia, sadly my Godfather passed.

Some months after his passing, it was summer and a scorching day…

I went for a stroll through my late Godfather’s first old Adelaide, Australia neighbourhood.
As I strolled through, on my way back to the car park there was an office premises that had a step and on the step was an off white in colour vase with a bouquet of Orchids!

The Orchids were left abandoned and they were waiting for me!

As I looked at them and waited to see if anyone would return to claim them, I turned around and looked onto the busy street and at that moment, a certain car, my late Godfather and I shared a passion for cars, photography and animals drove passed with my Godfather’s name on the number plate!

A Spiritual Turn of Events! A Sign! My Godfather’s name! The Orchids!

The Orchids with the Vase!

A floral arrangement, featuring Orchids and Roses by a local florist!

Orchids and their Symbolisms

Orchids is from the Greek / Hellenic word ‘Orchis’

meaning; ‘testicle’ and it’s meaning is associated to beginnings – marriage

Orchids in the Flesh!

✭ The Peoplescape 2001 Celebrating Australians the Centenary of Federation